Here are the slides from Facing Facebook for Small Business, delivered to fabulously fun peeps at the Fernie Chamber of Commerce on Thursday, March 24.

And some cool links:

I discovered Branch Out today. Well, rather it discovered me in an invitation to connect with a friend who works in a similar industry to me. So I did. I was awarded a Super Connector badge. I discovered 8 other friends who’d also signed up. I imported my LinkedIn profile…..

Wait a minute….I imported my LinkedIn profile? Why did I do this?

It’s a few hours later now, and the harsh reality of mid-afternoon is setting in. I love LinkedIn. I find it to be a great business resource. I’m connected to previous colleagues, people I’ve met at industry events, clients, and other fine folks with whom I have a business or networking relationship. Not (necessarily) people I went to band camp with, snogged, am related to, used to be related to, and send Kenny Powers quotes to (although some of my LinkedIn people have crossed the line to become Facebook friends too. I trust they won’t judge me for making the odd penis joke). LinkedIn has afforded me speaking opportunities, job offers, helpful groups and discussions, and referrals within the confines of a business environment. Now I have the ability to give an endorsement to someone who shaved my eyebrows at a volleyball tournament (we’ve since made up)….and something isn’t sitting right with me.

Branch Out is “jobs and career networking on Facebook.”

We Facebook for pretty much everything else, so why not jobs and careers? I’ll tell you why. It all boils down to the premise that your coworkers are really NOT your friends.

Job and career stuff can be fun, but not the same fun stuff as happens on Facebook. And there’s a reason for that: it’s still – even in our hyper-connected lives – possible to separate business from pleasure. Let’s keep it fun, okay?

* Here’s an article on Branch Out from the big brains at Tech Crunch. 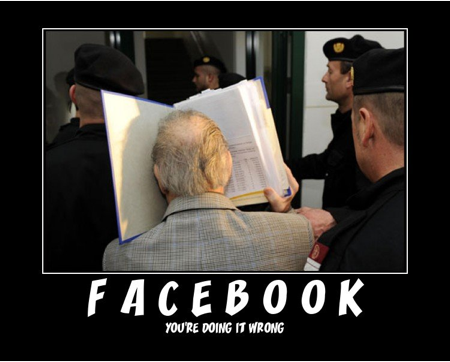 We can turn you off. we can hide you. Look at the fate of many of your Facebook Farmville friends, Spammy McSpammerston.
And cross-posters. I connected with you on Facebook because we have that personal thing. Maybe we made out a few times. Maybe we co-lamented under the migraine inducing fluorescent lighting of that office. Maybe we’re related.
In the social of all social networks, we tend to allow our friends a bit of leeway when it comes to promoting their businesses and interests. After all, what’s the purpose of the network platform if we all don’t compulsively share?
There is an etiquette, however, and it becomes even more important as marketing more obviously invades our precious social sites. We can’t be sure that ‘suggestions’ are organic. Look at the suggested ads that run down the side of your profile. Everything’s in public honey.

Don’t junk up my morning scroll through Facebook with incessant tweets, hashtags, and the like. It’s like you’re throwing crumbs at me. Use Twitter to connect with the networks that bring meaning and value through that particular channel.
Use someone’s name in your status update if it refers to them. Voyeurs as we all are, we like to see what you’ve deemed share-worthy from and for someone else. If you share a link, add some context by telling us why we should care. If you can describe something in 140 characters in the hope of being retweeted, surely you can spare the time to bring some ‘so what’ to your Facebook posts.

Don’t abuse the LIKE. Creating a company page and asking everyone you know to Like it is akin to ringing my doorbell every 10 minutes, and then running away. What’s there to like? Links to content that I might find useful? A contest that will make me salivate with desire? Don’t forget that Big Brother is watching my likes – and will advertise to me accordingly. Be responsible.

Take this into consideration: a post this week from Social Web School looks at a growing trend for companies launching or re-launching on the web. An interactive, custom-designed Facebook page is emerging as the platform of choice for many brands, instead of an independently-housed site of their own. Why? Well, since it’s Facebook, you’ve got the social built in. You’ve got access to the social graph. You’ve got the usability that is now almost second nature – since most of us on the planet are already there – and Facebook’s ability to target pages based on your love of Nickelback (ugh), or root beer, or knitting.

We love (and hate, sometimes) Facebook for it’s tentacled hold on our social and digital lives. Are we ready for it’s explosion into our consumer lives? My bet is on companies who can create an experience that flows seamlessly with the social functions we already use. And then our friends can act like friends, instead of telemarketers.

My Tuesday morning round-up of the best of my Tweetdeck turned up a real gem – a revised Ladder of Engagement and subsequent post from the good folks at Forrester (and authors of the seminal lime green tome Groundswell).

Bernoff, Li and company first introduced the concept of a ladder in 2006 to illustrate the emerging “science” of social technographics. Social technographics work much like traditional demographics – it’s about attempting to create profiles of people’s online interactions and assign “rungs” to levels of behaviour, or levels of interaction. Social Technographics can be used to generate insights, to test technologies, and to measure interactions. The 2006 version of the Ladder of Engagement included the following categories, or levels of online participation (from top to bottom): 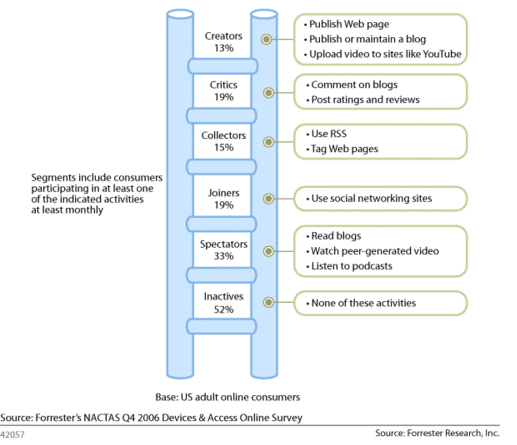 The ladder is an useful image, since people climb up and down the rungs depending on their motivation to interact, their comfort level with new technologies, and most importantly, their level of engagement. They also shift as our world gets a little more digital, and more brands hop on the social media bandwagon.

Today’s revised ladder includes an important new rung, or category of online participation. The Conversationalist lands just under the Creators, and according to Forrester Research, accounts for 33% of online behaviour. Over half of these are Chatty Cathy’s rather than Chatty Chads, and over two-thirds are over 30. The Conversationalist actively participates in social networking, and updates his or her status at least weekly. Conversationalists are the real users of Facebook (and the reason, we can assume, behind many of the interface changes since its’ launch), and those who Tweet. It’s content, but it isn’t quite Creator content. Although I do have a few Facebook friends whose droll and witty status updates should really be published in a coffee table book of snark.

I started to think about what engages the conversationalist. Why do these prolific status-ticians (made that one up) take the time to use their chosen social platforms? Why do they retweet, but not take the next step into the creator behaviours mentioned above? What does the emergence of the conversationalist mean for brands? The Facebook update, no matter how well thought out, isn’t the same as a meaningful exchange between between a company or organization and its’ customers or clients. On Facebook, the conversations happen between people who have, in whatever level of reality, a human connection. And it’s so easy to take it further, to like or comment on someone else’s life. Tweeters tweet to their followers because someone out there is listening, and someone might respond, or connect based on shared interests. We were all pretty pleased to see Jeff Bridges win a Golden Globe. We were pretty disgusted with our Prime Minister’s recent display of arrogance.

The intrinsic need to connect paired with an intuitive, “safe”, and personal platform for doing so means that conversationalists can converse without the marketing noize of the internetz. “I ignore the ads, I only read the status updates.”

What’s a wallflower brand to do? Here are some questions to ask:

I’m really hoping for feedback on this one. And now, I’m off to scroll through Facebook to see if anyone has anything droll and witty to say.