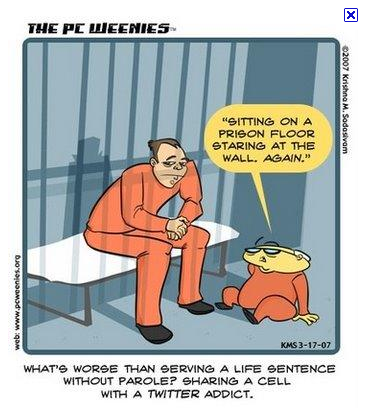 Twitter is a conversation. It’s a place that facilitates worldwide communication within the tricky parameters of 140 characters. And 140 characters means a very small window of opportunity to get one’s point across. Twitter is as search-y as Google, but in real time, and related to conversations actually happening. Twitter’s usability has morphed and improved with the development of third party applications, particularly for business. Users can experiment with clients such as HootSuite, TweetDeck and CoTweet to manage multiple accounts and access numerous search fields and conversation strands. The ability to stream followers and friends into lists (public and private) is an amazing organizing tool.
In order to be followed on Twitter, a company or individual  (and preferably, an individual from a company) must follow others and initiate conversations, share valued content, conform to the Twitter “rules”, such as giving credit when a link is shared, and respond to mentions and direct messages in a reasonably timely fashion.  Not once a week during scheduled “social media time”.  Surefire techniques for not being followed would be to not follow back (here again is a fine line, since automated following is hugely frowned upon), to blast out scheduled content directed at everybody (but really nobody), and to be unresponsive. All interactions are public on Twitter (except for Direct Mentions, which work like email), so it is easy for anyone to look at a Tweeter’s history and see a gaping absence of real connection. Like any social network, it takes time to build community. But the time to start is now.

Tweeting as a company is a hugely difficult exercise unless one has the brand awareness of a Dell or an Apple, a government agency, or a specifically web-based customer service function (like FlipVideo, FreshBooks, Prezi). Since companies aren’t typically good at making their messages personal and directed at individuals (whether within an existing Twitter channel or a conference related backchannel), they can come across as unwelcome, noisy advertising reps. Companies that Tweet successfully allow the personal and human qualities of their Tweeters shine through. They prove themselves not to be robots by being real, multifaceted, and genuine. They use real photographs, instead of company logos. They indicate which company they work for, but describe themselves in authentic, natural ways.

The consistent use of hashtags (the act of putting a # in front of a term, thus making it searchable for all others and creating a de facto “theme”), makes it relatively easy to follow discussions, events, and topics.  Even the act of monitoring these discussions is useful, because despite their frenetic appearance, many individual issues are being addressed. Most chats are archived for those who miss a week. Lists and groups of participants are available on third party sites like TweepML. Think of these chats as a place to hold a virtual focus group with real, live, online customers. It’s a great opportunity to start connecting and build trust.

Tweeting through events provides a valuable backchannel for attendees and virtual observers alike. Most conferences now assign themselves a hashtag, so that anyone following the event can participate or “watch” by following that particular meme. Examples include #BlogHer, #ISTE2010, and any TED or TEDx event.
If a company is sponsoring a speaker, they might assign someone to tweet from the audience, mentioning that speaker’s key points, external resources, plans for later (TweetUps etc), links mentioned, and manage questions for the speaker from the audience. Presenters might agree to be online to answer questions post workshop. Displayers might offer promotions and contests through the backchannel. Twitter users at conferences often organize their own events, or TweetUps, to make IRL (in real life) connections. Participation or sponsorship of these events can show potential customers that the backchannel is valued, and that companies are listening and participating, and facilitating the IRL holy grail. Because it’s great to meet people. Unless they’re twats.

Tweeting content that people want to share is important, and can include articles, blog posts, free access to desirable content, and promotions on websites. The best way to gauge whether content is valued can be through the number of retweets (RTs) a message earns. But if nobody is following, then nobody benefits. If a tree falls in the forest….  However, the best, most authentic, and only sustainable content worth sharing is interaction. Entering conversations. Asking questions (real ones). Promoting others. Sharing research, within a loop that allows those who access the content to share it, comment, and add their thoughts.
Twitter is full of content, great articles, posts, videos, and discussions. By tapping into what people are talking about, it’s possible to understand what they value. What they share with each other, and the topics that resound.  For organizations, developing an “editorial calendar” can help for planning time spent nurturing and creating relationships on Twitter. Each month of the year presents opportunities to focus on specific content, as well as the more traditional areas of interest.  For example,  September and October offer a variety of opportunities to talk about heading back to school. Hosting a Tweet Up (where Twitterers shed their keyboards and meet up in real life) can be paired with promotions, launches, and bringing people together, eliciting a favourable emotional response from existing and potential customers.

Be real. Be human.  You can’t automate it. You can’t manufacture trust. But get out there. The early bird catches the worm, and poops on the twat.