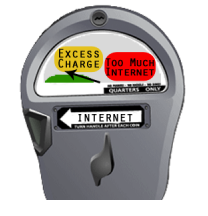 Like many concerned and outraged Canadians, I’ve been watching the Usage-Based Billing (UBB) development with great interest. I signed the OpenMedia.ca petition. I shared stories with our uninformed friends and colleagues. I felt embarrassed, and yes, furious, that the CRTC would move in such an incredibly backward direction with regard to online access.

Today I feel a bit less aggravated as I learned that Ottawa would reverse the controversial CRTC billing decision, but I consider myself warned.

UBB would have a number of negative implications for Canadians. Many have spoken of its potential to kill innovation. To stymie web-based collaboration and the development and sharing of content. To create a dangerously tiered structure of access, with the wealthiest having the greatest access. UBB would limit access in the sectors where we are at a critical crossroads and need innovation, such as health care and education, at the expense of the profit and content monopolies that our telecoms so desperately want to preserve.  It ain’t right.

How can we push and advocate for free, open, and transparent use of the internet, when cost issues (as opposed to old thinking and ideologies) are the prohibitive factor?  Yeah, unlimited web access is great, if you can afford it.

And then a beloved and trusted South African Twitter contact chimed in on my frustrations. You see, UBB is the state of the internet in South Africa. She connected me with Alistair Fairweather, who is the Digital Platforms Manager for South Africa’s Mail and Guardian online. He also writes for Memeburn and News24. I was curious to explore the implications and outcomes of UBB in a place where it is part of the system, and Alistair was gracious enough to answer my questions:

How much does the average South African pay for unlimited monthly internet? Is this affordable?

In US Dollar terms, a decent (10Mb/s) “uncapped” connection will cost well over $150 per month. If you want proper broadband speeds (30Mb/s or higher) you’re looking at as much as 5 times that.

Does this constrain the average web user from accessing the media they are interested in?

Very definitely. Many South Africans scrape by on less than 1GB of usage per month. Most billing is done on a “capped” basis – ie you get a certain amount of data per month and are either cut off or pay more to use more. And, of course, you lose any data you don’t use. This means that most internet users are constantly and painfully aware of what they are doing online, and how much bandwidth it will use, for fear that they get cut off and can’t access their email on the 28th of the month.

Does UBB prevent certain types of media (video etc) from being produced and accessed?

It doesn’t prevent it per se – it just makes it much less attractive. What amateur videographer is going to pay $15 per GB to upload her 45 minute, HD wedding video to Facebook? In the States that’s not even a consideration. And of course, an aspiring local film maker can’t use the internet to access a mass audience because barely 5 million South Africans are even online.

Any implications for education? Online learning?

Definitely. Paying by the MB makes schools nervous of providing unlimited internet access, or internet access at all. The same goes for many homes – kids aren’t allowed online for fear of downloading some innocent video and using up their parents cap.

How do South Africans feel about it? Have they tried to change it?

Most of us are very angry about it. We are trying to change it, including lobbying government to open up the market, but when 70% of your country is mired in poverty, it’s quite hard to make them pay attention to something as “luxury” as internet access.

Is there a telecom monopoly?

Yes, and it sucks. Our old state monopoly – Telkom – is now a parastatal but still enjoys an effective monopoly over the “local loop” of our fixed line telephony system. They are inefficient, greedy, corrupt and idiotic. They have single-handedly stunted the growth of our entire internet industry through their stranglehold on both ADSL and our outbound peering links with the world. If I had my way I would have the lot of them horsewhipped and fired, and dissolve the entire company. Our other telecoms companies are also greedy, but at least they are progressive and intelligent.

I’d like to thank Alistair Fairweather for taking the time to share his insights on this issue.