“Clowns to the left of me, jokers to the right
Here I am, stuck in the middle with you..” 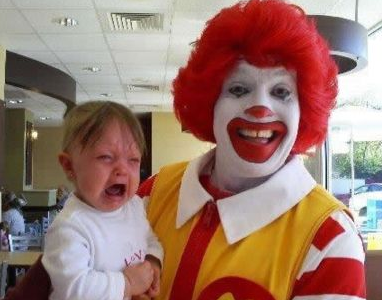 What happens when you encounter something truly surprising? If it delights you, you share it compulsively with pretty much anyone who will listen. And if something pisses you off, well, can anyone say BP?

So this post is about extremes. Or polarities, if you will. And it’s about marketing too. Over the last month, I’ve had the extreme good fortune to attend a number of events that catered most effectively to those inhabiting the opposite ends of many spectra. I participated in MentalHealthCampTO, the planning for a ChangeCamp in my local East Toronto (as a run up to the upcoming municipal elections), NXNE Interactive, and a knowledge sharing and social media forum with recent project grantees in the environmental action arena. Each event is significant in its own right, catering to its own audience, and encouraging of next steps and actions. And I’d be willing to hedge a pretty strong bet that those who got the most out of each respective gathering operate outside the murky middle. And if life, business, and social change are one big graduating class, these are the ones most likely to succeed.

Now clowns. Clowns scare me. They’re garish and they wear outsize shoes. Their makeup conjures memories of having to kiss my senile Auntie Ada on her juicy (and hairy) crimson lips. Clowns are aggressive. Yet converting a clown could be the action that takes your campaign or target to the next level. If you can catch a clown’s attention – if you can get past their objections (or floppy red shoes) through content that either thrills them or makes them want to hurl a bucket of water – then you’ve created a conversation. And possibly a convert.

And jokers, well, jokers are the connector types fetishized by Malcolm Gladwell in The Tipping Point. Jokers want to tell you something. They thrive on you being delighted. They love to see you laugh. Your shock makes them wet themselves with pride. Hook a joker with something worth talking about, and the joker will do his or her best to make everyone else care. (Did someone say “viral”?)
In the lofty name of inspiration, here are 6 campaigns or ideas that seem to be oh-so-cleverly designed for those operating on the edges.

I hope these inspire you. I hope they make you want to raise the bar. Do something cool.